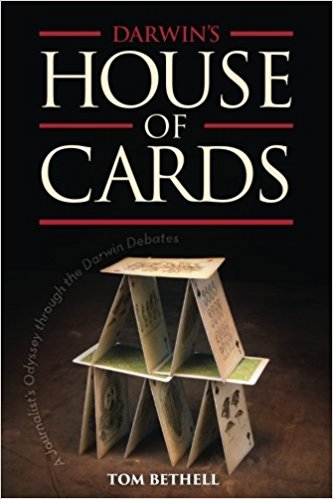 The widespread public acceptance of biological evolution in Darwin’s day was probably a product of the simultaneous faith in Progress.  Darwin’s theory was accepted as readily as it was because it shared in the general belief that things were getting better.  It’s not that the organisms themselves were being swept along, but that European and then American intellectuals believed that everything was improving. – 256

This is the way Tom Bethell ends his entertaining book attacking the reigning scientistic consensus of evolution.  Darwin’s House of Cards is a fully up-to-date survey of the mechanics and effects of evolutionary theory; a theory which Karl Popper concluded was “not a testable scientific theory, but a metaphysical research program” (14).

As to the general optimism which provided the conditions for the enthusiastic acceptance of Darwinism in the middle of the nineteenth century, Bethell writes,

[A]s I hope to show in the following chapters, the science of neo-Darwinism was poor all along, and supported by very few facts.  I have become ever more convinced that, although Darwinism has been promoted as science, its unstated role has been to prop up a philosophy – the philosophy of materialism – and atheism along with it. (20).

In the nineteen chapters which follow the author reports on and dismantles numerous evolutionary claims and “evidences”, showing among other things that common descent, natural selection, and random mutations are either pure fiction, tautological, or terribly over-plugged.  He challenges the dogma of the tree of life, noticing along the way biochemist Craig Venter’s denial of it (53-54), and paleontologist Colin Patterson’s frank admission that the nodes in the tree of life diagrams are always empty (55-56).  Why?  Because there is no real evidence for it.

Speaking of Patterson, who was chief paleontologist at the Natural History Museum in London until his death in 1998, Bethell interviewed him several times, and chapter 12 reviews those conversations.  Although Patterson remained a thoroughgoing evolutionist, he came to the opinion that it conveyed no scientific information at all.  As Bethell reports it, he said that scientists could do very well without it (149).

In the same chapter we are told about two world-renowned experts in their fields who admit that the funding for their respective fields is minimal compared with digging up fossils.  Nevertheless, both said that “you don’t find out much from fossils”, and that they could find out much more by studying living things (146-148).

This book’s short chapters are so well written that the author is able to cover a great deal of territory in a relatively short space.  This means that along with the usual problematical areas for evolution; natural selection (chapters 5 & 6), the fossil record (chapter 11), homology (chapter 9), DNA and Epigenetics (chapter 15), etc., he also tackles less well documented issues like extinction (chapter 7), and convergence (chapter 10).  There is also a useful chapter about Richard Lenski’s long-term experiments with E-coli (chapter 16).

As to homology, for example, he notes, the propensity of naturalists to invoke design while supposedly trying to explain it away.  Homologists, or those who rely on them, often write of the relative similarities in structures from different organisms without being forthright enough to declare that these similar features often are derived from different sets of genes! (109-112).

To take a few more examples, despite the recent demonizing of humanity and our deleterious influence on nature by many progressives on the left, no one knows why extinctions happen (86-92).  As for “convergence”, the belief that differing species evolve similar traits due to their experiencing the same kinds of environmental and ecological pressures, evolutionists again beg the question.  Evolutionists have tended to substitute their imaginations for proof, and nearly always simplify extremely difficult matters in the process.  So on page 119 Stephen Jay Gould is quoted as saying that in certain flying creatures, “highly adaptive forms that are easy to evolve arise again and again.”  Bethell responds that if flight is so easy to evolve, “Someone should tell Boeing engineers how that was achieved.”

As we’re on the subject of engineering, chapter 13 is given over to “Intelligent Design and Information Theory.”  At the start of the chapter Bethell mentions the work of Michael Behe, William Dembski, and Douglas Axe (155-161).  He deftly dispatches theistic evolutionist Kenneth Brown’s attempt to oppose Michael Behe’s “irreducible complexity” findings (155-156), and then states the obvious truth that, contrary to creationism, “Intelligent design theory… does not identify a designer, any more than we can identify the designer of Stonehenge.” (157).  Why then the resistance to ID?  For instance, citing Wikipedia’s slanted presentation:

Numerous attempts have been made to change…derogatory comments, but all such changes are promptly reversed on Wikipedia – sometimes within minutes. (161)

The thought-police are very active.  But of course the reason has already been given.  The reigning view of the intellectuals is naturalistic atheism.  Therefore, the facts will always be made to comport with the theory, however vicious the contortions have to be.  Chapter 14 describes the link between “Darwinism and the Philosophy of Naturalism.”  This chapter includes a good discussion of freewill, or the denial thereof by many of these “Freethinkers”, although the irony of their calling themselves by this term seems to be totally lost on most of them!  Bethell’s responses to this are effectively structured around the work of Michael Egnor and Thomas Nagel.

Four chapters about the practical fallout of evolutionary ideas come just before the closing chapter on “The Rise and Fall of Progress”.  These chapters are superb summaries of the often troubling tendencies of evolution as ideology.  First up (chapter 17) concerns the issue of “Sociobiology.”  Instinct is replaced by genes (203, 205-207), which issues in all kinds of ethical outrages such as viewing rape as normal.  Next comes “Human Exceptionalism and Its Enemies” (chapter 18): a very pertinent section in which the author states his thesis that “Sentiment for human exceptionalism is inversely related to Darwinism.” (216), and which goes on to deal with whether animals will ever talk (the answer is No), and then discusses the common belief that evolutionists have in extraterrestrials.  The chapter on AI is unusual for a book like this, and is all the more valuable for it.  To summarize the chapter in one sentence; artificial intelligence will never happen (235).

After going through the book twice one of the most telling impressions left on this reviewer was how much of evolutionary thinking is actually circular reasoning.  And of course, in the opinion of many influential evolutionists, there is no reasoning happening, since conscious thought is an illusion (e.g. 170, 208-209).  But if evolution is true then something like materialistic naturalism must be true (236-237).  The trouble is, as Bethell sees it, not only are the accumulated facts eroding the bulwarks of evolutionists, but the ebbing of the supporting tenets of a belief in Progress will surely make evolutionism look more and more implausible.

This is an excellent addition to the literature against evolution, and is recommended for mature readers of ages.  The trolls will no doubt be out in force to give their one star ratings on Amazon.  But perhaps a few of them will read it and think again?  This is a five star book.