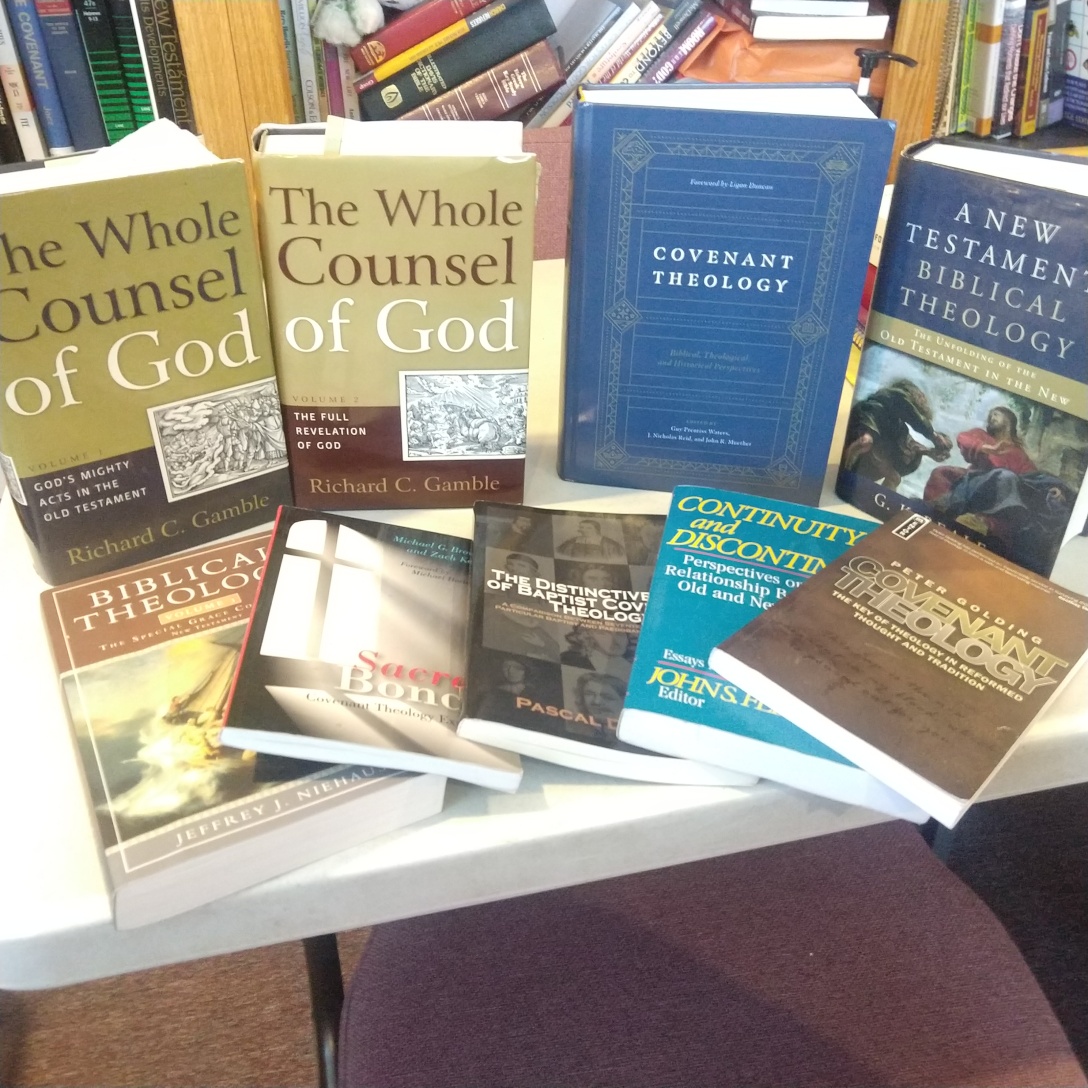 In the first volume of his impressive work The Whole Counsel of God, CT Richard Gamble identifies four covenant types in Scripture. I have no qualm with the first three, but Gamble’s fourth variety of covenant is “one among the three persons of the Godhead.” (I.284). He sees a “hint” of this in the words “Let us make man in our image” in Genesis 1:26, but points to a “clearer example” in Genesis 8:21-22. In this instance “God was not speaking to Noah, but was in fact making a covenant with himself.” (I.285).

I have a high regard for Gamble and his book, but the fact that he has to resort to such examples to find an intra-trinitarian covenant is surely telling. As we saw last time, the “covenant of redemption” is not even confidently asserted by many covenant theologians, and it is not found in any passage of the Bible; it is inferred from what CT’s call “good and necessary consequences.” What makes them necessary? In my opinion what makes the consequences “necessary” is the necessity of finding support for Covenant Theology. As I have said previously and will repeat hereafter the theological covenants are deduced from CT’s operating from the position that the rest of Scripture must be interpreted from the cross and its presumed consequences. One of those consequences is that there must be only one people of God.

The Covenant of Works (1)

The covenant of works also has its detractors in the Reformed community. John Murray is the best known of these. His criticism comes in his essay “The Adamic Administration” which is in his Collected Writings, Vol. 2. Meredith Kline and O. Palmer Robertson change out the names for the covenants of works and grace for “creation” and “redemption.” For more on this dissent concerning this covenant see Peter Golding, Covenant Theology, 105-109, and Robert Letham, Systematic Theology, 349-352. Granting this intramural issue, I will continue on the assumption that the covenant of works is essentialist CT. Let us start with a definition:

“God’s commitment to give Adam, and his posterity in him, eternal life for obedience or eternal death for disobedience.” – Michael G. Brown and Zach Keele, Sacred Bond, 45.

“The creation bond between God and man may be discussed in terms of its general and its focal aspects. The general aspect of the covenant of creation [aka “works”] relates to the broader responsibilities of man to his Creator. The focal aspect of the covenant…relates to the more specific responsibility of man arising from the special point of probation or testing instituted by God.” – O. Palmer Robertson, The Christ of the Covenants, 67.

CT’s are usually ready to admit that the covenant of works is not discoverable from the plain text of Scripture. But “good and necessary consequence” is on hand to help. Leading Puritan theologian Anthony Burgess said that the covenant of works “must only be gathered by deductions and consequence,” while Beeke and Jones are clear that this means “inference.” (Joel R. Beeke & Mark Jones, A Puritan Theology: Doctrine for Life, 218-219).

I have no problem with the notion that a collection of passages can be arranged so as to arrive at a conclusion about a doctrinal tenet. For myself and Dispensationalists the “rapture” teaching is one such example. One combines the relevant texts and tries to come to “an inference to the best explanation”; one with the best explanatory value and the fewest problems. This is what I call a Category 3 formulation in the Rules of Affinity.

So where does one gather together the texts which cumulatively argue for a prelapsarian covenant of works? You will perhaps not be surprised to learn that the interpretation of the passages from which the covenant of works is given a scriptural appearance are themselves a product of “good and necessary consequences”! Here are a few:

It ought to be clear that to arrive at the three conclusions above even more “good and necessary consequences” need to get involved. But I pass on. Since the covenant of works was supposed to be apiece with the original creation there has been debate among CT’s whether Adam was made in the covenant of works of for it. Beeke & Jones put it like this:

“whether one believed that Adam was created in a covenant, by virtue of the law being written on his heart, or created for a covenant, once the terms had been set forth by positive institution, all were were agreed that the presence of these two trees, which represented life and death, promises and threats, confirmed Adam in a covenant of works.” – Joel R. Beeke & Mark Jones, A Puritan Theology, 224.

The arrangement between God and Adam is claimed to be that his probation would be ended and he would have been given a glorified body and eternal life had he kept faithful. The “covenant” was the test (See Richard P. Belcher, Jr., The Fulfillment of the Promises of God, 26 n. 5, 33).

One of the conjectures that CT has handed down to us is that if Adam had just kept obeying for the right amount of time God would have confirmed him in righteousness and granted him inherent eternal life. This grant would still have been gracious because the “work” Adam did could never earn the reward that God “promised.” A search of Genesis 1 – 3 will show that God prohibited Adam and Eve from eating of the Tree of the Knowledge of Good and Evil, but it will equally demonstrate that there was no word of promise about eternal life after a period of testing. That again is inferred.

Belcher is correct to state that “covenants operate on the basis of a representative principle” which includes descendants (Ibid, 26), but it must be noted firstly that this “seed principle” is part of the biblical covenants, and second, that it need not cover all descendants. The Abrahamic and Davidic covenants are instances of this. As there are zero examples of oaths taken in respect to the covenants of redemption, works, or grace in Scripture, what we have is yet another inference taken from reading the biblical covenants (Noahic, Abrahamic, Mosaic, Priestly, Davidic, and New) and supposing that the “covenants” of CT do the same thing as those clear covenants stipulate.

I shall continue next time by looking more at what CT’s say about the covenant of works before looking at what the Bible has to say about it.