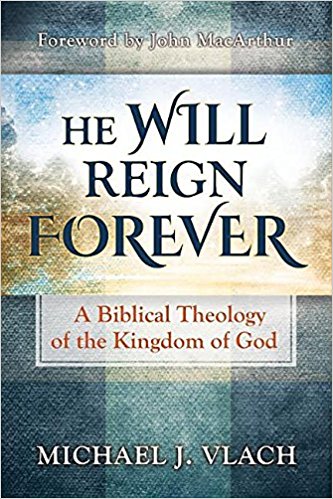 This is the final installment of my review of this book

As he moves through the Book of Acts the author addresses the main kingdom passages only.  An author must be selective with his material, so the relatively brief look at Acts is no mark against the book.  In fact, due to his ability to sum things up quickly and accurately Vlach can pinpoint the salient passages and continue into the Pauline corpus.

That said, he manages to dwell on the really crucial texts.  He says, for instance, “Acts 3:19-26 is a strategic passage for the kingdom program.” (421).  And he has spent 7 pages getting to that conclusion.  He not only exegetes Acts 3:19-21, he demonstrates Peter’s compliance with expectations raised by the Old Testament.  He then mentions how Acts 3:25 cites Genesis 12:3 and 22:18 to prove that Israel – representatives of which the Apostle is speaking to – is still the same national entity as was envisaged in the Abrahamic covenant (420-421).

Any worthwhile account of the kingdom in the New Testament has to tackle James’s use of Amos 9 in Acts 15:16-18.  Does James reinterpret the prophet the way amillennialists insist he does?  Vlach says there is a partial fulfillment of Amos because now Christ has come Gentiles are invited to God through Him. “The point of Amos 9:11-12 is this – a restored kingdom of Israel under the Messiah results in blessings to Gentiles.” (424 italics original).  However, Amos 9:13-15, which refers to the restoration of Israel in the future, are not quoted by James (425).  Partial fulfillments of OT prophecies ought to be expected because of the space between the two comings – something which was far from clear in the OT.

Entering upon Paul’s epistles, the first thing Vlach does is to set out the fourteen references to the kingdom.  In dealing with each one the constant theme is the futurity of the kingdom (433).  A crucial passage is 1 Corinthians 15:20-28, and Vlach pays ample attention to it (436-444).  Here the author’s exegetical and analytical skills are fully utilized to prove, I think conclusively, that Paul assumes an intermediate kingdom reign of Christ on earth before He delivers up the kingdom to the Father.  I shall not go into detail here, but his handling of the epeita… eita formula (with reference to 15:5-8), the use of Psalms 110 and 8, and the fact that Christ must reign “until” show the necessity of the premillennial view.

When coming to the great eschatological section in Romans 9 through 11, one could have wished that more space had been allotted to the Apostle’s argument.  Three pages is not enough, and it amounts to the most disappointing part of an otherwise excellent book.  This was surprising to come across, and perhaps a second edition could improve on the deficiency?  What is said is right enough, but since the Olive Tree metaphor especially is subjected to inattention and misreading I really hoped for a thorough analysis of the passage.

The chapter which follows (ch. 30) deals with “The Kingdom in Hebrews”.  The Book of Hebrews is turned this way and that depending on the propensities of interpreters.  But just read “on its own” so to speak, it is an exceedingly prophetic type of literature.

In his handling of the epistle Vlach investigates two questions: the kingdom passages and the use of Psalm 110:1, 4.  He concludes that,

Christians currently are looking for the world to come (2:5) and the city to come (13:14).  Jesus is currently exercising His priestly role from the right hand of God but is waiting for the day when He will reign as messianic King, putting His enemies under His feet (Heb 10:12-13).  The kingdom has not arrived yet but it will come in connection with divine judgments to come (12:26, 28).  But like Abraham, Christians are looking for the coming heavenly Jerusalem, a literal city that will exist on the earth. (467)

Whether one agrees entirely with the author’s understanding of “the heavenly Jerusalem” the chapter is well argued.

The treatment of the last book of the Bible is lengthy (471-527).  Perhaps a cynic might think that it betrays a predilection for the End Times, but if the book has been studied to this point such a notion ought not to arise.  Vlach is weaving his argument together in the course of examining the Revelation.  Since the Book is concerned with the Lamb’s victory over the present world system we are told up front that room will be given to its considerable kingdom teaching.  Vlach is never passe in his employment of the Apocalypse.  One is never given the impression that he assumes the role of an apologist for dispensational premillennialism.  He is tracing his thesis, based on investigation.

The first thing he shows is that passages in the beginning, middle, and end of the book anticipate a coming kingdom, not one that is present, either in John’s time or in the whole era of the Church (i.e. the seven churches in Rev. 2-3 – though not as markers of church history).  Here he hits a home run.

Revelation 2 – 3 refutes the view that Jesus’ millennial kingdom is now in effect.  There are two things we know about the thousand-year kingdom of Revelation 20 – Satan is bound (vv. 1-3) and the saints are reigning (v. 4).  These conditions do not exist for the churches in Revelation 2 – 3. (477)

Vlach references Revelation 2:10 and 2:13, and concludes quite logically that, “It is highly unlikely that the churches of Revelation 2 – 3 viewed Satan as being bound.”  Indeed!

I would have liked a tad more interaction with contrary points of view on the interpretation of Revelation 12 (485), with more argumentation of the key interpretive hot topics (the identity of the woman, the ‘man child’).  The same complaint cannot be leveled against the treatment of Revelation 20 (ch. 32).  The author presents a compelling case for the premillennial view from the text, while also showing the fallacious and awkward interpretations amillennialists ans postmillennialists are forced to adopt.

When he deals with the question of whether the New Heavens and New Earth are a renewal of the present Cosmos or involve a destruction of it so as to replace it with a New Creation, Vlach opts for the former view (509ff.)  The present reviewer, though not wishing to make very much of it, prefers the latter position.  The whole thing is somewhat academic; nothing much is at risk in the decision, but I do not think Satan wins anything but a Pyrrhic victory if God decides to start anew.  Besides, it is God who cursed the earth, not Satan.

The book is completed by several essays on theological topics related to the purpose of the author.  While they are all worthwhile, the two on “The Necessity of a Coming Earthly Kingdom” and the “Fulfillment of the Davidic Covenant” are the most important.  A final two page “Conclusion” in which the holistic nature of the Bible’s teaching on the kingdom is stressed completes the book.  Bibliography and full indices follow.

In summary, He Will Reign Forever is the kind of book dispensationalists have been waiting for for a long time.  It keeps to its thesis – meaning that it doesn’t concern itself with such things as the pre-trib rapture – but it conveys the grand narrative in a way that is faithful to what the Bible itself says; and it shows that the Old and New Testaments can be understood as a unit, without changing the meaning of God’s words to accommodate the Church.   It is an example to dispensationalists and non-dispensationalists alike that biblical theology in this form has a great deal to offer.  Michael Vlach furnishes a sustained irenic argument for the Kingdom of God as a future reality involving mediatorial and eternal dimensions integrated into the warp and woof of Divine revelation.  He pursues his cumulative argument in a persuasive and deeply satisfying way, wisely avoiding getting bogged down in defending a dispensation cum stewardship structure for his work, instead going with the text and allowing it to unfold his thesis for him – which it assuredly does.  I am grateful to the author for this book.  It is the first volume I shall be recommending to anybody who wishes to understand the dispensational approach to Scripture.